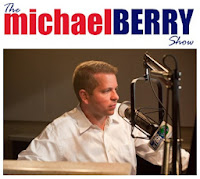 Last week, our company was lucky enough to be mentioned on the Michael Berry Radio Show - thanks to my call. If ya haven't heard of Michael Berry, you surely will. I predict this guy will become the biggest thing in radio one day soon. Michael is like a combination of Rush Limbaugh and Howard Stern, with the angst and certainty of a Good Ole Boy! And I ain't just referring to the "Good Ole Boys" of the south, because us "Good Ole Boys" exist all over this great country - including here in upstate "Libtard" New York.

While Howard Stern and Rush Limbaugh are each honest in their own way, they also pander to certain entities whether they realize it or not. Michael Berry on the other hand, only panders to the thoughts in his own head. This guy doesn't care about anything but the truth when he's on air, and that's what makes his radio show so refreshing.

The Michael Berry Show is all about the truth of what's happening now and if you don't like it, that's too damn bad! I'm pretty sure Michael will be thrown off radio long before his time only because he's too intellectually honest, but he'll certainly stay on top via the internet. If it's any consolation, I figure Michael wouldn't stay on any radio station that wanted him to pander to any group - so he'd probably quit before they could ever fire him.

And Yes - Good Ole Boys can be as intellectual as anyone, whether they're from the great state of Texas like Michael, or the "Not so Great" state of New York - like me. The point is Michael Berry could be compared to one of the "NEW" founding fathers. We need more Americans like him to spread the word of common sense and the common man (or woman) to save this country.

FYI - After I called Michael's show last friday, we have received nearly 100 orders for our Sinus Plumber hot pepper horseradish nasal spray from his faithful followers and each of them has proven to be true "Salt of Earth" Americans who we are proud to serve. I was not looking for a specific plug when I called The Michael Berry Show, but he allowed me to plug Sinus Plumber and we are so thankful as a small business that was screwed by Wall Street (but that;s another story). Soon, we're hoping to grow enough to be able to advertise on Michael's syndicated radio show. I just wanted to say thank you on behalf of our company to Michael Berry and his awesome listeners.

As our small company grows, you can surely bet we'll be advertising with the Michael Berry Show.

Link to the Michael Berry Show.

Link to Greensations
Posted by Unknown at Monday, December 16, 2013