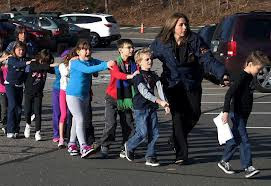 The Newtown Connecticut school shooting is one of the most horrific tragedies in American history, but there's another terrible tragedy that could potentially come out of this that could unfairly damage the lives of innocent autistic people everywhere.

The brother of the shooter Adam Lanza, has been quoted by police as claiming his brother "had a personality disorder and was somewhat autistic". As the parent of an autistic child, I was horrified to hear that autism was mentioned in this case. Personality disorders and autism have nothing to do with each other.

Whether the shooter had a personality disorder or not - he was certainly mentally ill, but autism had nothing to do with this tragedy. Autism is not a mental disorder - it's a neurological developmental birth defect. People with autism are not treated with medications or psychological therapy. They are treated with occupational, speech, sensory and special education therapies.

Autism is an epidemic that effects (1 in 88) American children, with no real explanation of the cause. In fact, autism cases have doubled in the past decade and the medical community is at a loss when it comes to confirming the cause.

As the parent of an autistic child, I'm pissed that the government hasn't sounded the alarm about the increased cases. In fact, any other disease that has increased the way autism has is considered an epidemic, but the (Powers That Be) never talk about autism. I've questioned prominent doctors about the increase of autism and they always tell me it's because of better reporting and diagnosis. I say that's a bunch of bullshit, but I won't go into my hypothesis in this post - because I don't want to deviate from the subject at hand.

The point is people with autism are not violent offenders in any capacity. Although each person with autism is different, they are all disconnected from society in some way and when they act out - they usually hurt themselves. Autistic people don't hate society - they just don't understand it and so they fear it. Autistic people are more connected to the earth than the rest of us. They don't seek out emotional offenses such as revenge or anarchy. In layman's terms, they don't think like that because autistic people hate confrontation. They run from confrontation and they never run to it!

What happened in Newtown, Connecticut was horrific and beyond words. It was evil and is truly unexplainable in any capacity. It doesn't come down to gun laws or school policies, or even society as a whole - and it certainly has nothing to do with autism. This terrible tragedy is about mental illness and pure evil. It's as simple and complicated as that!