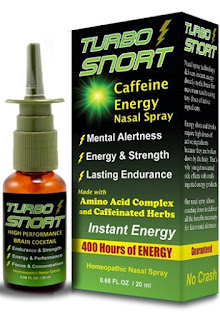 The world's first caffeine nasal spray is making big waves in the energy supplement market as it moves into mainstream convenience stores. In barely three months, Turbo Snort has found its way into more than 500 convenience stores and tobacco shops across the United States. The most recent addition is Tobacco Superstore, the largest "smoke-shop" chain in the southern United States - with 84 stores in Arkansas, Tennessee, Missouri and Mississippi.

This unusual energy nasal spray is the latest entry from GSC Products, a company known for creating innovative natural health and beauty products. According to the company's CEO Wayne Perry, Turbo Snort gives users all the benefits of caffeine without the usual unwanted side effects.

"By delivering caffeine through the nose, it bypasses the systemic processes that break down orally ingested products. Energy drinks give you a speedy buzz with a big crash and no middle ground because they have to deliver large doses of caffeine. The true benefits of caffeine are actually on the low end of the scale when it comes to effective mental alertness and concentration. With a nasal spray, only small doses are needed to get big results," Perry explains.

Numerous studies show caffeine increases mental focus and productivity while performing intricate tasks, but when the dose is too large -- the brain gets overloaded. When caffeine is ingested in large doses, it provides more of a body boost and less mental alertness. When small doses are delivered through the nose, caffeine boosts mental concentration without the jitters and crash normally associated with energy drinks and shots.

As the world's first caffeinated nasal spray, Turbo Snort provides instant mental alertness by delivering caffeine directly through the blood / brain barrier. According to the manufacturer, each spray contains only 1 milligram of caffeine, but the effect is smooth and fast. Turbo Snort also contains high performance amino acids Creatine, Taurine and Glutamine, as well as proven herbal extracts including Guarana, Kola Nut and Green Tea.

Turbo Snort is designed for all levels of caffeine fans -- from occasional coffee drinkers to full-fledged Red Bull and 5 Hour Energy addicts. Though Turbo Snort is a standalone product, it can also be used in conjunction with other energy supplements to overcome their crashing effects and help sustain mental alertness.

Turbo Snort is available at a variety of online retailers and in select stores. For press inquiries and information on wholesale or retail, contact GSC Products directly or visit their official website at www.TurboSnort.com

About GSC Products, LLC:
Founded in 2009, GSC is known for its unique natural health and beauty brands including Greensations, ThermaSkin ThermaScalp, Acne Killer, Venomous, Turbo Snort and Fresh Beauty Market. GSC is a privately held corporation with facilities in Clifton Park and Albany, NY. More information is available at www.Greensations.com and www.FreshBeautySkincare.com