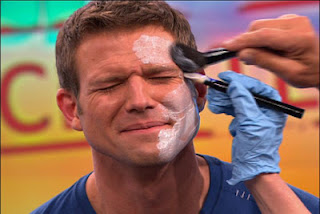 Our new Wrinkle Butter made with earthworm poop is being featured on The Doctors TV Show tomorrow. I haven't seen the segment yet (and I'm sure they'll make fun of it), but I've been told by the producers that they also confirm the science behind it.

It may sound strange, but the latest fad in anti-aging skin care comes from earthworm poop. Known as Worm Castings or Vermicast, earthworm excrement may be the Holy Grail of whole body skin care. It’s an accepted fact that earthworm castings make plants grow larger and faster than chemical fertilizers with none of the chemical dangers, and they are approved for organic farming. Earthworm castings also extend the life of plants by energizing their stem cells with an array of organic anti-aging compounds. Those same organic compounds are now being used to produce similar anti-aging effects on human skin.

Earthworm castings naturally contain humates, auxins, kinetins and cytokinins that act as plant-growth regulators. They stimulate cell growth, uptake of nutrients and even act as an anti-aging compound that slows the decay of plants. Each of these compounds has been shown to have the same anti-aging benefits when applied to human skin. In fact, the most expensive and well regarded anti-aging products contain one or more of these hormones, but in tiny doses as compared to earthworm castings.

Humates: Healthy soil contains most if not all vitamins including humic acid and fulvic acid.  Humate is the term given to all humic substances.  Fulvic acid is found in humic acid and has a strong influence on the metabolic process of plants and the health of the soil for which plants grow. It is only recently that scientific research has been performed on humic acid.Studies have shown that humic acid impairs the attachment of certain viruses to their respective hosts. As a result, these viral infections can be impeded.  Several studies have shown that many other viruses have been inhibited by humic acid as well.  This anti-viral property of humic acid may be considered "broad spectrum" meaning that it may be useful versus many viruses. The mechanism of action of humic acid is believed to be the blockage of the virus from attaching to and entering a healthy cell.These materials prevent a virus from duplicating by being absorbed onto the viral surface protein and thereby blocking the absorption of viral particles to cell surfaces. Humic acid has also been shown to have anti-inflammatory properties and bolster the immune system.

Auxins: A variety of hormones are in the Auxin family and they have been proven to have an immediate firming effect on skin while helping to repair the damage of time.

CytoKinins: The anti-cancer and anti-aging effects of Cytokinins have been well documented. They regulate cell division and influence the rate at which cells grow and decay. Cytokinins are plant hormones that promote cellular growth and delay the aging process.  Cytokinins stimulate cell division, delay the aging and destruction of tissues, protect against cell oxidation, and postpone cell death.  Studies are now showing that the potent, protective, anti-aging effects of Cytokinins work the same way in human skin.


Kinetins: Kinetins are used in anti-aging skincare products because of their ability to improve the appearance of mature and photo-damaged skin. Kinetins are essential growth hormones found in green leafy plants that prevents leaves from aging, keeping them plump and firm. As a powerful antioxidant, kinetin is believed to help in preventing free radical damage. Studies have suggested kinetin is effective in improving hyperpigmentation, promoting an even skin tone, smoothing the skin's texture and reducing fine lines and wrinkles. By helping the skin retain up to 25 percent more moisture, kinetin also promotes a healthy and hydrated complexion.