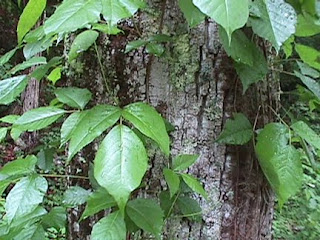 Poison ivy, sumac and oak are toxic plants native to North America that adversely affect an estimated 50 Million people every year. As members of the Rhus family, each plant causes the same type of rash by producing a toxic reaction on the skin. These plants contain an oily substance called Urushiol that oozes from the leaves, stems and roots of cut or crushed plants. Topical contact with the oil causes allergic reactions that produce inflammatory redness, painful blisters and severe itching.

While 25% of the population is generally immune to small doses of urushiol, the natural substance appears to be growing more potent with increased carbon dioxide levels caused by global warming. This means less people are immune to the toxic plants, and more people are suffering worse reactions than they did only twenty years ago.
Recent botanical research shows rash-inducing plants are growing faster and producing more potent toxins as compared with plants of earlier decades. Rising carbon-dioxide levels seem to create ideal conditions for the poison plants, producing larger and faster growth along with more potent toxins. As more potent urushiol is produced by plants, the toxic reactions become worse and affect a larger population.

As the scourge of poisonous plants worsens, traditional over the counter remedies are becoming less effective across the population. While there are many remedies for poison ivy and its relatives, most are made with chemicals that mask symptoms until the rash has passed, but none are able to fully relieve the condition. The average case of urushiol poisoning can last up to three weeks, but there are natural botanicals that can neutralize the toxin to promote faster healing -- even as the toxin becomes more potent.

Thankfully, while urushiol is increasing in potency, other plants that produce natural antidotes are also increasing in potency. Our newest skin care product uses proven botanicals to relieve topical urushiol poisoning by incorporating more potent strains of proven anti-inflammatory plant extracts such as jewelweed. ThermaSkin Itch Blocker is designed to instantly counteract itching and irritation caused by a variety of toxic plants. Our proprietary formulation of Jewelweed, Caspaicin, Pareira and Goldenseal neutralizes autoimmune responses caused by contact with urushiol.

Look for thermaSkin Itch Blocker to be released this week at www.Greensations.com
Posted by Unknown at Wednesday, April 14, 2010