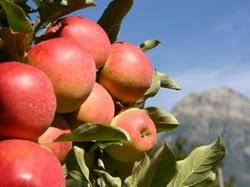 Our new ThermaSkin Repair Sticks are coming soon. These skin repair sticks feature Swiss Apple stem cells infused in a formulation of capsaicin, olive oil, arnica, kola nut, grapeseed oil, goldenseal and beeswax. Our Greensations skin stick is a 100% natural solid balm in a unique body stick that can be applied as needed.

Swiss Apples, also known as (Uttwiler Spätlauber), come from a nearly extinct variety of apple trees only found in Switzerland and first recorded in the 18th century. When the tree's bark or the skin of an unpicked apple is punctured -- it heals. Once picked, an Uttwiler Spätlauber apple lasts months longer than all others.

Scientists at Mibelle Biochemistry in Switzerland decided to investigate whether the miracle component in Swiss apples could be harnessed to stop the aging process in people. They found the key to the apple's longevity in in its unusually resilient stem cells. In clinical tests the apple's stem cells appeared to protect human skin by nourishing and stimulating the cells along with defending against UV radiation. In a trial using 20 volunteers and supplying a 2% cream twice daily, scientists found that line depth was reduced by 15% in wrinkles, crows feet and damaged skin.

The discovery of the skin healing powers of Swiss Apple stem cells has opened up a new market for creams and lotions using this incredible ingredient, but so far anything containing Swiss Apple stem cells costs between $100 all the way up to $1,500. Over the past few months, it's mainly rich people, models and movie stars who've been using Uttwiler Spätlauber extract because of its high cost. In fact Vogue magazine recently reported that First Lady Michelle Obama uses a $325 cream containing Swiss Apple extract. Not too many of us can afford something that expensive.

The result is a solid skin balm that contains active amounts of Swiss Apple stem cells at a much lower cost that anyone can afford. In addition, the capsaicin and caffeine also increase topical blood flow and promote natural healing while also protecting the skin from UV damage. Capsaicin and caffeine also reduce wrinkles and lines while tightening skin and when combined with Swiss Apple stem cells, this formula goes beyond any other anti-aging products to provide fast and lasting results.

Our Greensations ThermaSkin repair sticks can also be used anytime just like any lip balm or similar product. They can be carried in your pocket or purse and can be stored in any temperature. You can also carry a skin stick while traveling on airplanes while liquids and creams are banned. Look for our new skin sticks coming in January at Greensations.com.